When we think about culture, we often think of paintings, shows and shared ways of communicating with one another. In this post I will dig into culture and highlight some ways in which it can be the most destructive force for those seeking personal sovereignty.

On November 18, 1978, over 900 members of the Peoples Temple movement died. The movement’s leader, Jim Jones, called a mass meeting at the Jonestown pavilion and proposed “revolutionary suicide”, by ingesting a powdered drink mix made from Flavor Aid (later misidentified as Kool-Aid) that was lethally laced with cyanide and other drugs.

The phrase “drinking the Kool-aid” has evolved to mean extreme dedication to a cause or purpose, so extreme that one would die for the cause. The Peoples Temple movement was a cult and cults becomes influential, in large part due to their cultures. In this case, the cult had a charismatic leader who captured the imagination of people (in a certain headspace). He contributed toward the creation of a culture that had its followers agreed to make the ultimate sacrifice.

Culture can be a very dangerous thing, because they encourage group cohesion. But in groups people often go mad, losing their sense of self and reality, particularly if they were fearful when they joined. It’s easy to get such people to join a group if they can see their salvation in it. Even easier if you can create the fear in the first place, then be on hand to offer the group in order to ease the discomfort.

Now I don’t know if the 900 “revolutionary suicidals” of the People Temple movement met their maker or not. But I certainly do not believe that it is not for any human being or a culture constructed by human beings to encourage others toward such severe actions. Autonomy must be given to people to make the big decisons of their lives – as unsavoury as we may feel them to be. Their ability to do so must be protected.

Now this is not to say that we should not extend support to those who have reached a low eb. However, we should be careful in deciding how much we step in and when. I’ll say more on that later.

Culture is a way to ensure that people get along well enough to avoid constant war… It allows us to feel a sense of collective identity. Culture teaches us to unite against a common enemy – “out there”. Culture is about unity. But it is also about compliance, creating short-sightedness and closes-mindedness. It subordination to the ideas of whomever had a hand in the creation of the culture in the first place. Living our lives solely within the bounds of cultural norms is thus the antithesis to personal sovereignty.

But culture is not without its uses. There are stages of development we must grow through in order to relate healthily to ourselves and put the prevailing culture in its proper place. Early in life, a Boy will follow the conventions followed by those around him, because he doesn’t know any better. He is taught stories that enchant him. Why would he question them? He trusts those around him to tell the truth. The belief is that his elders know the truth!

But when he reaches a certain age, what I call the Man stage, he starts to ask “why?”. Why do we do things this way and not that way? Why do those people say one thing and we say another? Why is this practice good for me and not for them? When we start to become a Man, we need to challenge what we have assumed to be true up until that point. The danger here is that we can throw the baby out with the bathwater. So we have to be careful.

Growing up, I never learned the value of marraige. I was just told to get married and assumed it was right. So I was planning on doing it and even had my kids’ names picked out by the time I was 4 years old. I was thoroughly indoctrinated, as it is correct for Boys to be. But as I progressed through my teens, I started to ask “Why”. People seem unhappy in their marriages and you don’t even get a tax break for it any more, so what’s the point?

But digging deeper – over the years – I learned that marriage (if taken seriously) is more than just a glorified business arrangement, ensuring that the correct paperwork is in place. There are benefits to society, but the personal committment alone (again, if take seriously) is profound. It means, “I’m not going anywhere, no matter what happens”. That should give us pause for thought if we find ourselves in head over heels on a night out in Las Vegas as Elvis becons us into his chapel . This committment should ensure that we can take full advantage of the growth opportunities that are now available to us. This is the process of reclaiming-what-works, that happens as you reach into the Patriarch stage.

Personal Sovereignty in the Peoples Temple

I would assume that those who join the Peoples Temple movement (men and women alike) had started down the path of questioning before encountering the cult. There questioning was likely due to personal loss and suffering (which is the impetus for many people). In this place, we are open. Open to seeing things more as they are, but we are also open to influence from others. I have found it to be very important to spend time in isolation when going through these phases. This ensures we don’t get swept up by those who appear to have some answers.

Though often of course, when feeling down like this, we long for company – for people who can make us feel better about ourselves and our circumstances. Perhaps we would benefit from such company, but in my experience, this can prematurely relieve a degree of suffering that is necessary for personal growth. That growth being – in part – toward finding the grains of truth in the stories and values that had been conducting our lives up to that point.

Finding the value in culture

Every story that lasts has a seed of truth. As does every value that is held broadly. As well as every tradition that has continued over long periods of time. The work of the Patriarch is to find the seeds. But he can only do this if he knows the stories (having learned them as a Boy) and interrogated them (as a Man), in isolation. This is part of the work of Personal Sovereignty.

We must always be aware that not only do all cults have a culture, but that all cultures are cults. People go mad in groups. But they come to their senses in isolation. So if this is new information to you, it’s time to start asking yourself Why. What Kool-aid are you drinking?

If you have started feeling that the world is not what you thought it was, reflect on these questions:

If you have started to understand the value in the stories and values you’ve grown up with, have a sense of direction and now want to start making good progress, check out my coaching services. My 3 month High Performance training might be exaclty what you need.

If you want more on the stages of manhood, check out the Map to Personal Sovereignty video.

The world needs 2 Million Patriarchs to ensure humanity remains free to grow and learn in this abundant school of life. Will you be one of them, or follow the culture like a Boy? 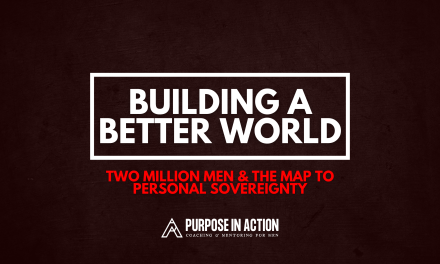