At Purpose In Action, we want men to be stronger.

Which is not the same as saying we want women to be weaker (a strong nation needs as many strong people as possible), but I know some of you will jump to this conclusion. Some of you would also describe history as a male dominated tyranny – I don’t totally disagree…

But we need to be clearer in our terms. The trouble maker has not been men, but masculinity and NOT a healthy, mature version of it. The greatest proportion of masculinity (healthy or otherwise) can of course be found in men. But also in women (perhaps increasingly so).

So let’s focus on unhealthy masculinity, regardless of gender. Let’s stop demonising and disempowering 50% of the population.

Still… I focus on men, because I am a man and it’s better for me to focus my limited time and energy (as a father of 3) on those to whom I can relate better.

My work is essentially helping them to discover and leverage their potential for collective benefit. Which requires them to become more mature.

There would be no need for me to do this if there were more elders in our communities to initiate our boys. But we haven’t recovered the loss of their wisdom since the world wars.

Ultimately I would like the men I support to become Elders. This requires them to face a series of initiations, moving from the clueless dependency of the Boy, through the rebellious narcissism of the Man, to the penultimate, responsible leadership of the Patriarch.

You will see me calling for more Patriarchs. By this I mean mature, balanced men. It would be a shame if women saw this as a threat. It is quite the opposite.

I’m with a woman who matches me. We challenge each other. We’re raising kids to demand respect from and to in turn respect others, regardless of their demographics.

This is what society needs. Sovereign, tolerant individuals working together for collective purpose. Genuine collective cohesion can only emerge from individual sovereignty.

Men, you have the chance to grow up and become the pillars of our society.

If you need help to do so, Book a Quick Chat so we decide if we’re the right support for you 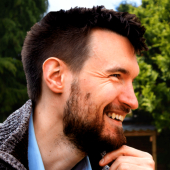 Through many inner and outer struggles I realised that our society is no longer set-up to teach wisdom. So I went about figuring out how that can happen - how we can turn ourselves into the elders our society sorely needs. I created Purpose In Action in order to enable people to gain the wisdom they need to fulfill their unique life purpose and contribute properly toward the creation of a better society.

What Would You Give Your Life For?

How to Live Free in Caesar’s World